caring for your Horse and Pony from Conception to Retirement...

Review of Oxyuris equi and control

Oxyuris equi (Pinworm) has received little veterinary attention until recently when an increase in clinical cases has become more common.  Essentially though pinworm causes more anxiety to the owner compared to the horse!

The life cycle of O. equis begins with the ingestion of eggs from the environment, which hatch in the small intestine and develop through several larval (juvenile) stages in the large bowel (ceacum and ventral colon).  Eventually these larvae mature into adults who live in the right dorsal colon. From here egg laden females migrate to and protrude through the anus to deposit their eggs in a mass of sticky fluid onto the perianal skin surface.  Eggs become infective in 3-5 days and then drop into the environment to complete their life cycle.  The classic ‘egg to egg’ period is 4-5 months. 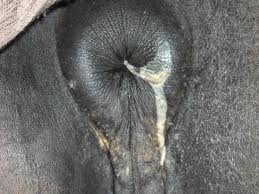 Female pinworms can deposit, in a single mass of 8-60,000 eggs, bound in fluid from their reproductive tract.  The fluid and eggs dry into a film of white, cream, yellow or green in colour.  There is evidence that the female then dies after laying eggs which explains the dead, collapsed females often seen protruding from the anus.  Male pinworm are not commonly found and then only in low numbers.

Pinworm infestations may only involve a few adult worms, with female pinworms markedly outnumbering males, often by a 10:1 ratio.  Infections are often more common in youngsters, compared to mature horses, with an age related immunological immunity.

Whilst larval stages live within the large bowel may cause low grade irritation, adult pinworm have less developed mouths and are not known to feed on the gut wall, and not known to cause any pathology apart  from the perianal egg irritation.

Diagnosis of egg deposits around the anus, either visibly or using cellophane tape applied onto the perianal skin and then examined under a microscope.  Tail rubbing is another obvious sign. 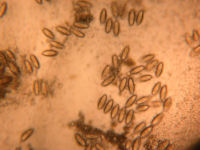 Where does the itch come from?

There are thoughts that either the pinworm uterine fluid or their eggs can cause skin irritation either directly by contact or via an immunological reaction.  This may explain why some horses itch intensely whilst others show no response.

Efficacy of worming programmes against pinworm are complicated by the adult pinworm not feeding on the bowel mucosa, so reducing the ability of the pinworm to ingest a sufficient concentration of the wormer to kill itself.  Similarly wormers that remain within the bowel lumen may lose their potency as they come into contact with adult pinworms.

Successful worming programmes may be assessed by repeated cellophane tape sampling of the perianal region at weekly intervals for up to a month post treatment.  It is not uncommon to find adult pinworm voided for several weeks post worming.

Manual removal of pinworm eggs is beneficial to their control as this stage is the key to perpetuating the life-cycle but also prevents tail itching and rubbing.

Bathing the perianal regions should be done with disposable materials, such as Baby wipes, then thoroughly dried to prevent chaffing. Contaminated wipes should be disposed of carefully.   As eggs can become infective in 3-5 days the bathing should be repeated every third day.

Due to their sticky nature and resilience, removing eggs from the environment is extremely difficult and generally unsuccessful.  Removing perianal eggs is easier and more effective.

Numerous reports indicate problems occurring after using Equest or Ivermectin based products.  Is this due to problems relating to the pin worms life cycle (not ingesting the wormer)?  Or changes in age related immunity meaning older animals are now more susceptible to pin worm?  Or are older horses now more prevalent anyway and these have a higher incidence of Cushings disease and immunosuppression.  Finally there appears to have been a genuine shortening of the egg-to-egg period to around 3 months meaning shorter life cycles.

Get an accurate diagnosis…either visually or by using cellophane tape.

Dead pinworm may be expelled 3-4 days after worming so from 14 days post worming start monitoring for re appearance of eggs.

If eggs re appear try an alternative wormer type such as fenbendazole or pyrantel.